skip to main | skip to sidebar

I've finally managed to post photos from the Bowdle, SD event. Refer to the link for additional images and details...

(Only have time for a few details and a couple poorly-processed photos...)

Chased with Derek Deroche and Amos Magliocco for all/portion of the time and met up with Bob Fritchie and Rachael Sigler late in the day. Observed 2 tornadoes associated with the supercell that tracked from Leedey to Guthrie, OK.

Tornado A. Approximate location: 3 WNW Leedey. GPS time: 321-325 pm CDT. Tornado developed on the southern periphery of the large updraft base, in a cyclonic region where the RFD had created a horseshoe updraft shape. Tornado condensed more than half way to the ground, but a narrow debris whirl extended upwards into the condensation funnel.

Only have time to provide a few details and a couple poorly-processed photos...)

Amos Magliocco and I observed 3 tornadoes associated with the long-lived supercell from Hartley to Dumas to Stinnett, TX. In addition, very impressive structure was noted, especially after 7pm CDT.

I was fortunate to observe ~13 tornadoes across eastern Colorado, generally along a SW-NE corridor from the John Martin Reservoir to Eads to Cheyenne Wells. The majority of these tornadoes were from separate occluding areas of rotation. All but one of the tornadoes appeared to have remained over open country, with one tornado striking a barn (rated EF1). Cloud bases were extremely low, making for a continuous challenge to stay in close range for photogenic purposes.

I've finally found some time to process and upload a collection of fall color photographs from various parts of Colorado during early October 2009. Enjoy!

It's hard to believe the last update to this page was nearly 5 years ago to the date. I've reconstructed the gallery and have included several new photos. Hail is something that isn't for everyone, but it remains a strong interest of mine when in the field. I'll be working with hail-related projects over the next 1-2 years with a great group of friends, so I'd imagine this page will require several updates during that time. Enjoy the collection! -SFB

I ventured out with Derek Deroche and Jared Leighton with an initial target near Independence, KS. We shifted our target southwest by 50 miles by early afternoon as it appeared the surface low’s progression was a little slower than anticipated. Jumped on a region of persistent low-topped convection located ENE of the sfc low south of Ponca City by mid afternoon. For the most part, low-level structure appeared fairly benign from our vantage point east of Burbank, OK.

We followed it northward on a rough dirt road to Foraker, then up Hwy 18 to Grainola. As we approached the KS/OK border, we noted a new stout updraft developing along the trailing line of arcing convection, immediately next to the mature tower. As this vertically grew, we observed a well-defined funnel cloud develop underneath the updraft base, associated with the new robust convection just SE of Cedar Vale, KS. This feature persisted for less than one minute before dissipating. From the existing sfc obs, we inferred this tower was in close proximity to the sfc warm frontal boundary draped across SE KS. Thereafter, we made several passes through hail swaths, with the biggest stones near a quarter. We stopped to enjoy the low-topped convection prior to sunset north of Sedan, KS and called it a day. 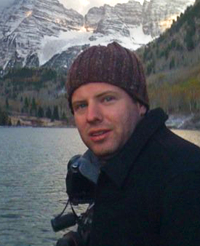